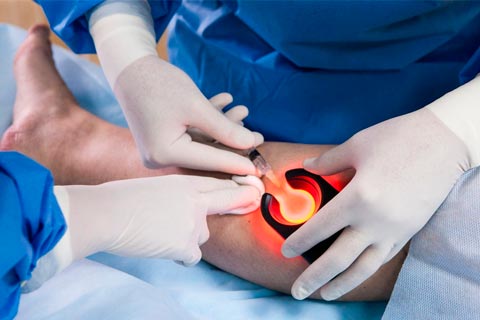 Varicose veins are a serious and common vascular disease. In the early stages, the disease is asymptomatic, therefore, when contacting a doctor, the patient already has a serious stage. Conservative treatment methods in this case are ineffective, therefore, an innovative technique is used - sclerotherapy of the veins of the lower extremities. There are the following types:

When to do sclerotherapy

The procedure is carried out in case of manifestation of symptoms such as:

For any manifestation of symptoms, the appointment of a sclerotherapy procedure is carried out only by the attending physician, based on the patient's condition.

Despite its safety, vein sclerotherapy, like any other medical procedure, has a number of contraindications. These include:

How many procedures do you need

To achieve the maximum effect, the procedure for sclerotherapy of varicose veins is carried out from 1-2 to 5-6, but sometimes longer treatment may be required. It depends on the depth, size and number of veins to be sclerotized. The number of procedures and the frequency of their implementation are discussed with the attending phlebologist. But the interval between sclerosis should be at least 4 weeks, this will allow you to accurately assess the results of the previous administration of the drug.

Before prescribing one or another type of vein sclerosis, a number of examinations are carried out to make an accurate diagnosis and determine the degree of varicose veins. A few days before the operation, you should stop smoking, drinking alcohol and using products that can damage the skin of the legs (for example, shaving and hair removal in women). Two weeks before the procedure, you should stop using drugs that affect the blood coagulation system. You should also take care of the purchase of underwear or elastic bandages in advance to ensure compression in the recovery period.

Before the procedure, the surface of the skin is treated with antiseptic solutions, then a puncture of the varicose vein is performed using ultrasound diagnostics. After penetration into the damaged vessel of the needle, selected according to the diameter of the vessel, the introduction of the sclerosing drug begins. If necessary, the doctor administers injections in several parts of the vessel. During the administration of the drug, the patient may feel a slight warmth or tingling at the site of the spread of the sclerosant.

After the injection of the drug, the needle is removed from the vessel and a cotton roll is applied, which is fixed with a bandage from an elastic bandage.

For successful treatment and consolidation of the result obtained after surgery, you must adhere to the following recommendations:

When you contact the medical center Doctor PROFI, you can get a detailed consultation of a leading phlebologist and do sclerotherapy of the vessels, relieving them of varicose veins forever. To make an appointment, call Contacts7503 A1, MTS, Life. Online booking

Phlebologists of the clinic "Doctor PROFI"

Benefits of treatment with a phlebologist at "Doctor PROFI"

Phlebology in Minsk without risks

Phlebological operations in Minsk can be without complications and risks only if real professionals work with you. Our phlebologists: Nebylitsin Yuri Stanislavovich and Vasiliev Denis Vasilievich are our pride. These are professionals in their field, having international certificates, not only annually learn new techniques and technologies from the best practicing surgeons in the world, but they themselves are well-known lecturers and mentors of many phlebology surgeons.

Professional approach to the treatment of varicose veins and thrombosis

Phlebology does not stand still, but develops and improves from year to year. If you suffer from venous pathology, sign up for a consultation with a specialist who uses modern equipment in diagnostics and treatment, as well as to cope with tasks of any complexity, performing operations on an outpatient basis. An experienced doctor will answer all your questions and select possible solutions to the problem.

If necessary, you can be assigned an operation, which is carried out directly in our medical center, in our own operating room. And specially equipped wards of the hospital will allow you to recover in comfortable conditions. In our clinical diagnostic laboratory, biochemical analyzes and morphological studies are carried out, etc.

The operating room is equipped with the most modern and advanced equipment, allowing even the most complex procedures in phlebology to be carried out with minimal damage. In the center "Doctor PROFI" all surgical interventions are performed under general anesthesia (local anesthesia, spinal anesthesia, general anesthesia). We use only high-quality, proven and modern drugs that practically do not cause negative reactions.

Clinic "Doctor PROFI" is a multidisciplinary family medical center, so if you need advice from related specialists, you will not have to go to another clinic.

We do our best to make the diagnostics at the Doctor PROFI clinic comfortable for our patients. We are proud of our diagnostic base, the professionalism of doctors who own the most advanced technologies. You will be able to look into every office, into every corner of the clinic. We have no secrets from you!