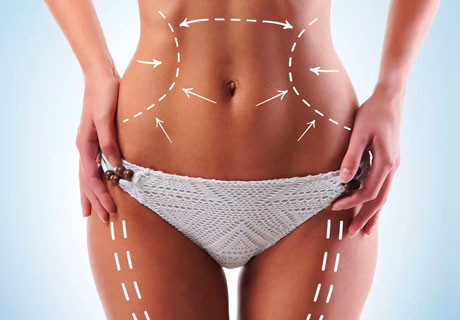 In the modern world, there are many people who are unhappy with their weight, or rather the presence of body fat. Some are dissatisfied with excess belly fat and the lack of abs, some do not like the "second" chin. When endless diets and grueling workouts don't help, people decide to do a procedure like liposuction. The operation is performed on any part of the body, the main thing is to choose the right method that is more suitable for a particular area of the skin. Consider the areas subject to liposuction:

All contraindications to liposuction can be divided into two groups: general and local. Common ones include:

Local contraindications include the affected or inflamed skin areas at the sites of the proposed operation, the presence of a fresh suture from a cesarean section during abdominal liposuction.

Before carrying out an operation to remove fat, it is necessary to undergo an examination to assess the condition of the body and the presence of contraindications. The doctor will conduct an examination and prescribe blood tests for HIV, hepatitis B and C, general and biochemical blood tests, and a general urine test. Before doing liposuction, you need to do a cardiogram and get advice from a therapist and anesthesiologist, while it is important to tell the doctor about all medications currently taken. It is also recommended to adhere to the principles of proper nutrition and a healthy lifestyle, excluding smoking and drinking alcohol.

How is the operation going

Modern medicine has several ways to remove fat deposits, but the most common and widely used method by doctors is tumescent liposuction. This procedure is carried out in the following way:

An alternative way to remove fat is laser liposuction, in which, instead of a thinning liquid, a laser-tipped probe is inserted under the skin, which destroys the cells of the adipose tissue. This manipulation is carried out under local anesthesia.

The recovery process of the body after liposuction depends on whether there was surgery. If it was, then within a few weeks, painful sensations in the area of the operation are possible. General recommendations include:

Advantages of contacting a plastic surgeon at "Doctor PROFI"

We do our best to make the diagnostics at the Doctor PROFI clinic comfortable for our patients. We are proud of our diagnostic base, the professionalism of doctors who own the most advanced technologies. You will be able to look into every office, into every corner of the clinic. We have no secrets from you!

Plastic surgery in Minsk without risks

Plastic surgery in Minsk without complications and risks can be only if a real professional works with you. Our plastic surgeon, Vladimir Aleksandrovich Kosinets, professor, doctor of medical sciences, doctor of the highest qualification category is our pride. This is a professional in his field, having international awards and a winner in the nomination "Best Plastic Surgeon in Belarus", not only regularly learns new techniques and technologies from the best practicing surgeons in the world, but he himself is a mentor and consultant to many surgeons.

A professional approach to correcting your appearance

Plastic surgery does not stand still, but develops and improves from year to year. If you dream of correcting something in your appearance, but you do not have enough determination or you have any questions, sign up for a consultation with a specialist. An experienced doctor will answer all your questions and select possible solutions to the problem. Plastic surgery, under certain indications, can make a person more beautiful, more self-confident and get rid of complexes associated with appearance.

The operating room is equipped with the most modern and advanced equipment, allowing to carry out even the most complex procedures in urology with minimal damage. In the center "Doctor PROFI" all surgical interventions are performed under general anesthesia (local anesthesia, spinal anesthesia, general anesthesia). We use only high-quality, proven and modern drugs that practically do not cause negative reactions.

Clinic "Doctor PROFI" is a multidisciplinary family medical center, so if you need advice from related specialists, you will not have to go to another clinic.

If necessary, you can be assigned an operation, which is carried out directly in our medical center, in our own operating room. And specially equipped wards of the hospital will allow you to recover in comfortable conditions. In our clinical diagnostic laboratory, biochemical analyzes and morphological studies, etc. are carried out.